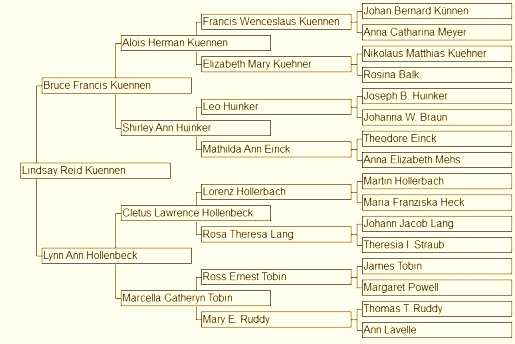 Ancestors of My Children

Every branch of my children's ancestry has been pushed back at least to their immigrant ancestor.  I would love to find the birthplace of Nikolaus Matthias Kuehner in Alsace, France, or somewhere in Germany and from there find his parents.  Kuehner is the shortest branch of this family tree, with Nikolaus born July 12, 1824.

Descendants of Wessel Künne (Kuennen Branch - 8 Generations with Sources - Updated 4/12/20)
Descendants of J. Barney Kuennen  (With Sources - Updated 4/12/20)
The Kuennen family is traced back to the villages of Hemmelte, Lastrup, and Suhle, near Oldenburg, in the Northwest part of Germany.  The oldest known ancestors are Wessel Künne, born about 1644 in Hemmelte, and his wife, Hilke.  I have found an older Künnen, Johann Künnen, b. about 1529 in Lastrup, and his wife Taleke, b. about 1531, but so far I have been unable to link them to Wessel.

Many of the Kuennens who came to Northeast Iowa immigrated together.  Gerhard Heinrich Künnen, b. about 1798, and his sons, Johan Heinrich (known as J. H.), Johann Wenzeslaus (J. W.), Herman Heinrich (H. H.), and my great-grandfather Johan Bernard (J. Barney), sailed on the ship Beethoven, and arrived in Baltimore on January 6, 1851.  (Some reports have some of the sons coming earlier.) Another son, Johan Gerhard, b. 1820, died at sea in 1850. 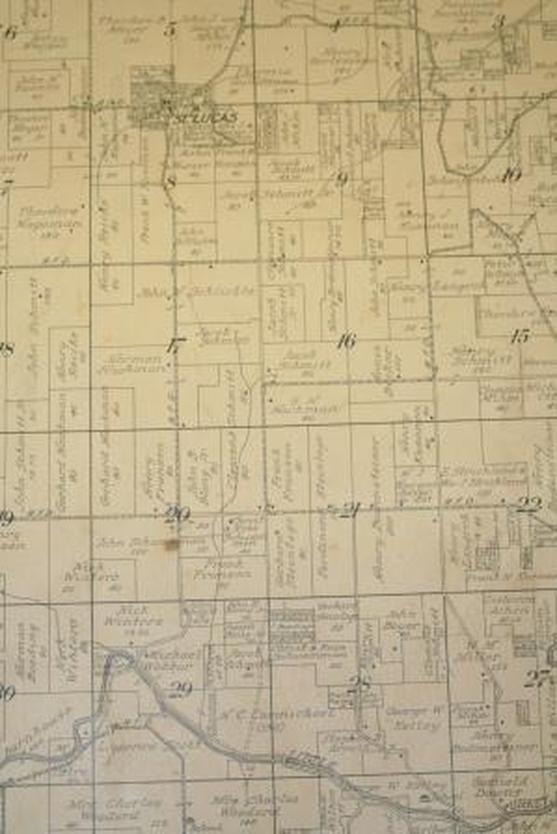 The family briefly stopped in Pennsylvania and in Indiana, but settled in St. Lucas, Fayette County, Iowa in 1854.  The original Kuennen farm is immediately south of the town, with one 40-acre parcel touching the property of St. Luke's Catholic Church - the cemetery.

J. Barney Kuennen bought the family farm from Matthias Steffes of March 8, 1878 for $2,100.  My grandfather, Frank W. inherited this farm.  My Dad, Al Kuennen was born and raised there.  His brother Leonard raised his family there, too.

When he was 17, my Dad went off to Illinois to learn his trade, plastering, with his younger brother Lee.  They both joined the Navy for World War II.  Dad served in the South Pacific on a "tender", as a diesel mechanic servicing and repairing submarines.

Dad returned from the war, met my Mom, Shirley Huinker, at a dance in Fort Atkinson, Iowa.  Mom remembers that he asked his sister about "the girl in the red dress".  They were married in 1947, and moved to Illinois, where Dad built their first home in Buffalo Grove, Cook County, Illinois.  I was born in Evanston, and Don, Doris, and Bill were born in Libertyville, before we moved back to settle in Northeast Iowa.  We lived in rural Festina, before Dad built another home for his family, just down the street from St. Francis DeSales Catholic Church, in Ossian.

Tom, Patty, Lori, Julie, and Jane were all born in Iowa.

I graduated from DeSales High School in 1967, went off to college at Notre Dame, spent two years in the Army, and then moved to the Northwest.  I met Lynn at the Univesity of Idaho, where we were married in 1977.

Chris was born in Pullman; Steve, Dave, and Lindsay were born in Olympia. 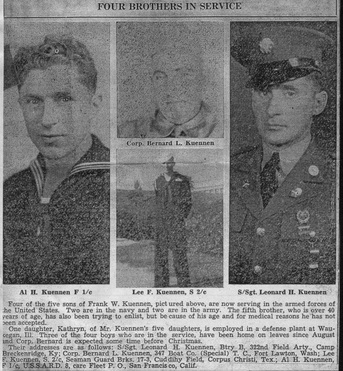 At the age of 17, my Dad moved to Techny, Illinois, where he worked at
the missionary farm and in the surrounding area until he enlisted in the U. S.
Navy during World War II. He entered the service December 22, 1942, at the Naval
Training Station at Great Lakes, Illinois, and was honorably discharged on January
24, 1946. During his tenure in the service, he was stationed at the Naval
Training School, Dearborn, Michigan; Navy Personnel Distribution Center at
Pleasanton, California.; and served on two ships, the USS Ard Eight and USS Telamon
(ARB8). He received the Good Conduct Medal and attained the rank of
Machinist’s Mate Second Class.

Three of Dad's four brothers also served in World War II.  This clipping is from a local newspaper.  (Click in the thumbnail at right to view a larger image, so you can read the article.) 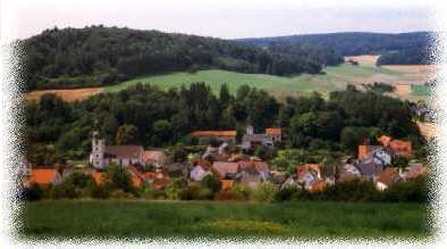 My wife was born Lynn Hollenbeck, but her father and his paternal ancestors were all born Hollerbach. Cletus changed the name from Hollerbach to the less German-sounding Hollenbeck in the years around World War II.

The Hollerbach family spent many generations in Bretzingen and Hardheim, in the Southwestern part of Germany.  Her grandfather, Lorenz, was 17 years old when he renounced his citizenship there and immigrated to the United States, sailing from Antwerp, Belgium to New York on the Red Star Line (a clipper ship), arriving on April 15, 1891.

Sometime around the turn of the century, Lorenz began to build pianos in Toledo, Ohio.  He made upright pianos which bear the name Hollerbach.  I have located three of them in existence in the early 2000s.  One of them, serial number 1003, was one of our prize possessions. When my wife died in 2019, I found another home for it so that it could remain in the Hollerbach family. As of this writing, in April 2020, it sits in the home of Erin "E. B." Peterson in Gig Harbor, Washington. E. B. is a great-granddaughter of Lorenz.

Cletus married Helen Haney, who had three children – Noreen, Donald, and Charlotte – before they divorced around 1936.  He then married Lynn’s mother, Marcella Catheryn Tobin.  Cletus died of a staph infection in 1962 when Lynn was 14, and Marcella died of cancer in 1963, before Lynn turned 16.

This is my Mom's family. She passed away on September 21, 2014. Most of my siblings and I were there when she died, and she generously gave us all a chance to tell her we loved her and to say goodbye. We all contributed to writing and putting this program together for her funeral in Ossian, Iowa. 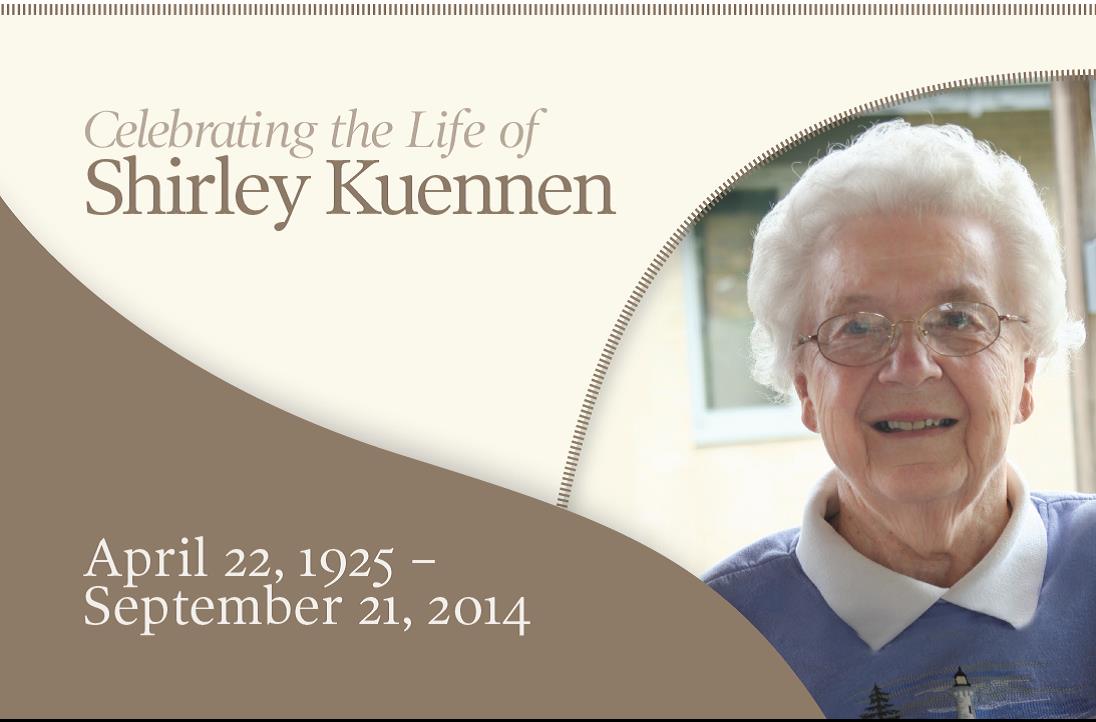 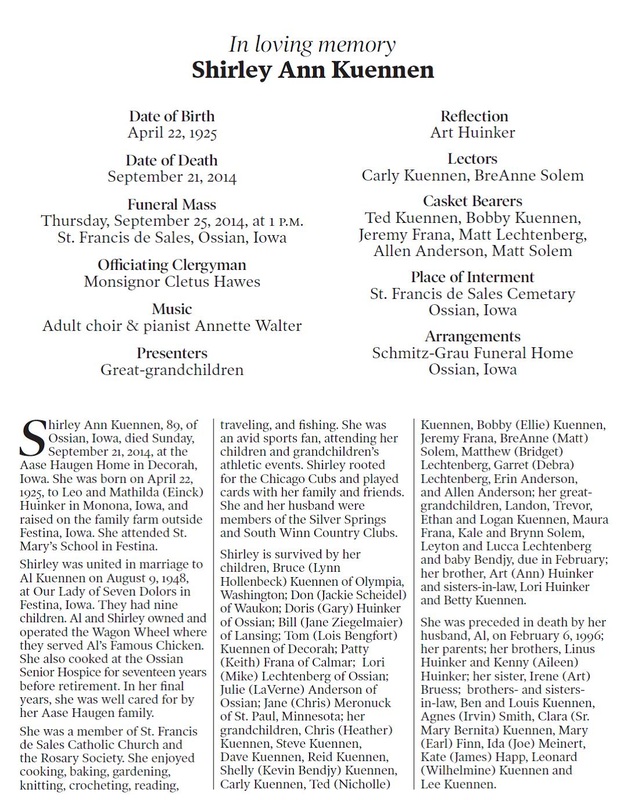 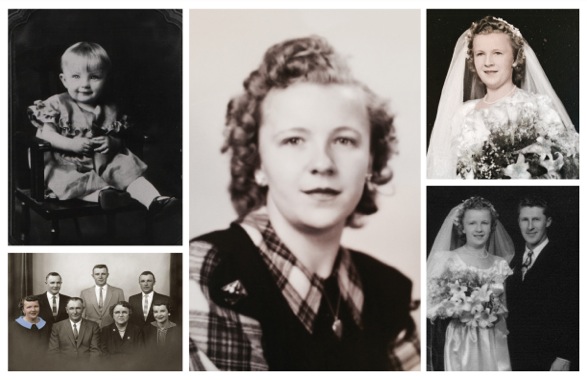 The funeral program also included an insert of touching remembrances from each of her grandchildren.

Mom's ancestors and relatives spelled the surname many different ways, including Huning, Hunker, Hinker, and Huninck.  The oldest ancestor I have located, Gerhard Herman Huning, was born in Vreden, which is now part of Germany and very near the border with The Netherlands.  The other small town where Huinker ancestors were born is nearby Lünten.


​
Johannes Heinrich Huning had eleven children with two wives in Germany before he immigrated to the United States, perhaps with some of his children, between 1850 and 1855.  Mom's great-grandfather Heinrich immigrated "around 1860", when he was about 35 years old, according to my sources.  I believe that all of Johannes' ten siblings and many of his children remained in Germany, so we should have many distant relatives there today.

(I am grateful to a German genealogy contact, Michael Cluse, for the following information about the Lünten / Vreden area.)

A chapel was built in Lünten, near Vreden in 1756. In later years people built their homes near the chapel. In 1906 the chapel was torn down after a larger Roman-Catholic church was built. This is the only church in Lünten today.

In the beginning only a few people lived in the village center. It was mainly a spot where farmers met after church, and for that reason there were several pubs and a bakery. A school (now a primary school) opened in the early 20th century, but for most other parts of daily life people need to travel to Vreden or Ahaus.

The Lünten area originally belonged to the city of Vreden. In the early 19th century the outskirts of Vreden were transferred into a separate community, "Amt Ammeloe". ("Amt" means "office", signaling that it a small municipality without city rights.)

Ammeloe is another village, approx. 4 miles west of Lünten and north of Vreden. In 1969 the "Amt Ammeloe" was merged with Vreden again, thus losing its independence.

Vreden itself is one of the oldest cities in northwestern Germany. The oldest written evidence of its existence dates back to 839, but archeological excavations show that the oldest settlements date back to approximately 600 AD. Around the year 1000 AD the convent of Vreden housed members of the most important German families, including sisters of the then current emperor. Later Vreden became a member of the Hanseatic League.

The bishop of Münster was the official regent for the area until 1802. After that Vreden became part of Prussia, although there is a small period around 1811 when the area belonged to France.  During the 30 Years War Spain also briefly conquered the region.

In 1871 Prussia became part of the German Empire. The border between Germany and the Netherlands in this region is the century-old border between the diocese of Utrecht (Netherlands) and Münster. It was reassured in the treaty of Münster which ended the 30 Years war between the Catholics and the Protestants in 1648.

Since the Protestants reigned in the Netherlands and Vreden was quite remote from Münster, the importance of Vreden declined over the years. The same is true for the Dutch side; the Dutch name for the region is "Achterhoek", which means "far end".

In the 19th Century major parts of Vreden were destroyed in two big fires (1811 and 1857). These fires and the resulting poverty caused many people to emigrate to the US. Unfortunately, these fires also destroyed most of the archives, including parish registers.

In March 1945, merely a month before WW II ended, the city was destroyed again. Lünten though was not directly affected. It didn't catch fire as it is too far away from the city center and it was too small (and not important enough) for allied bombings.

Both Vreden and Ahaus had a house or castle for the bishop. Both buildings still exist today.  The castle in Vreden now houses the city council, the castle in Ahaus (called Schloss - "chateau") is used as a school and a museum nowadays. You can see the Vreden castle on Wikipedia: https://en.wikipedia.org/wiki/Vreden)

I am not aware of any people in Germany called Huinker today, but Hünker and Huning (which probably lead back to the same roots) are common names in Vreden and especially in Ammeloe.

Descendants of Edward Tobin (Updated 4/13/2020)
Edward Tobin was born in 1807 in Gowran, County Kilkenny, Ireland.  He enlisted in the British Army in 1828, in Her Majesty's 22nd Regiment of Foot, and served for 22 years, seeing duty in the West Indies (Jamaica), the East Indies (including India), and Canada, where he chose to retire - in Amhertsburg, where he and his wife are buried.


Edward married Mary Malone, who was 15 years younger than he, in 1837.  All of their sons - Richard, John, James, William, and Joseph - chose be be mariners.  Captain James Tobin, born in 1851, married Margaret Powell; both were born in Ontario, Canada.


Their son Ross Tobin, Lynn's grandfather, also chose the life of a mariner - he was the captain of large ships which transported goods on Lake Erie.  He died in 1923 in Buffalo, New York, of an appendicitis attack he suffered on Lake Erie.  Lynn has heard a story that Ross was involved in bootlegging during Prohibition.  She says that he would drive one of ten boats from Canada to Cleveland, on the theory that if anyone got caught at least the other nine boats would get through.

Ross and his wife Mary Ruddy had two daughters, Marcella (Lynn's mother) and Virginia, both born in Ohio.  Marcella worked in Real Estate in the Cleveland area.